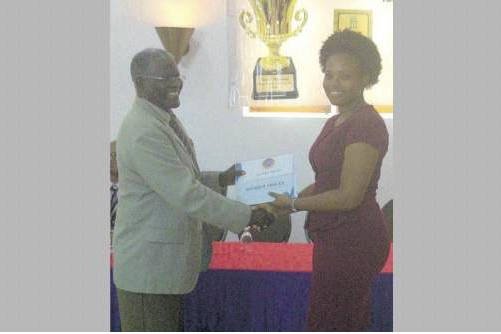 The First Regional Cooperative Credit Union continued its commitment to give back to its members and their children through its education funding when it recently awarded in scholarships, bursaries and book grants valued at over $1 million.

Patricia Smith, CEO of the credit union said the Grade Six Achievement Test (GSAT) scholarships have increased from $35,000 annually to $45,000 for each student. The students will receive funding for five years of their high school education; however, she warned that they had to continue to perform at a high standard.

“If I give you something, you have to give me something,” Smith said, urging the students to continue to excel in high school.

The scholarship recipient for this year are Vashti Tracey, Shakera Grant and Roberta Richmond, who will all attend St Hilda's High School; Javauhn Eubanks, who will be attending York Castle High; Chanel Moss, who will be going to Montego Bay High School; and Dominic Kirlew, who will enter Wolmer's Boys' School.

The scholarship recipients were chosen after doing an interview with a panel from the credit union. Students from the group interviewed who did not receive a scholarship received book grants.

Custos of St Ann Norma Walters congratulated the credit union for its commitment to its corporate responsibility.

Walters told students: “Stay focused as you go to school. Learn to love your books.”

She encouraged the students to give up distractions such as cellphones to ensure they maintain high grades.

Ainsley Richmond, the father of one of the scholarship recipients expressed joy that his daughter was awarded because of her hard work.

“I feel good because she worked hard,” said Richmond, who was recognised during the scholarship award ceremony for the fatherly role that he plays in his daughter's life.

Richmond, who is a single parent, said he was there for his daughter to ensure her success.

“She maintains the discipline. I just guide her along the way and then she puts in the work. I do the typical things that a father should do: care for your child, be there for her and stuff like that ... talk about the school work,” Richmond told the Observer.

“Being there for her, it keeps her on the right track. I'm feeling good, but I know that there is the other step that requires more work. I am grateful and happy and hope she does her best at high school,” said the man from Oracabessa in St Mary.